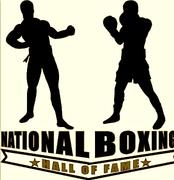 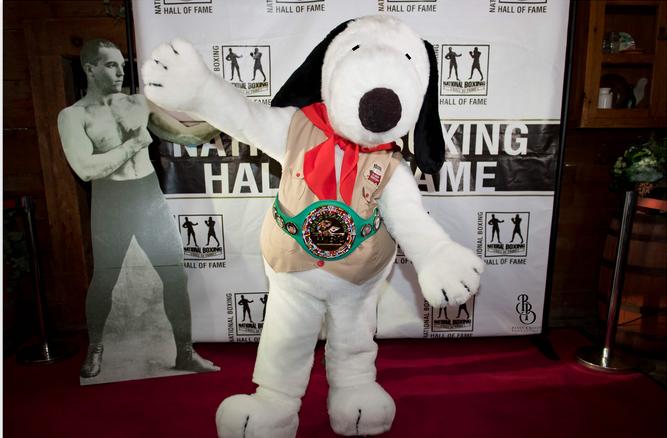 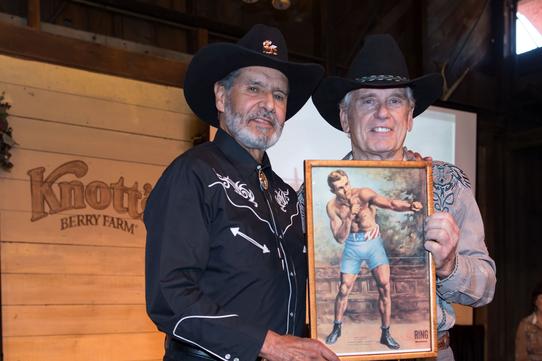 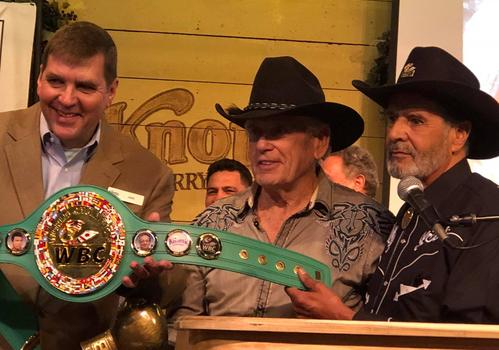 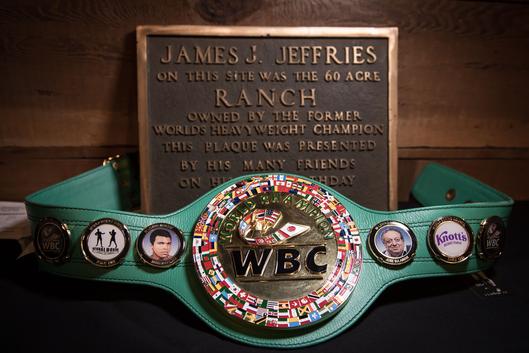 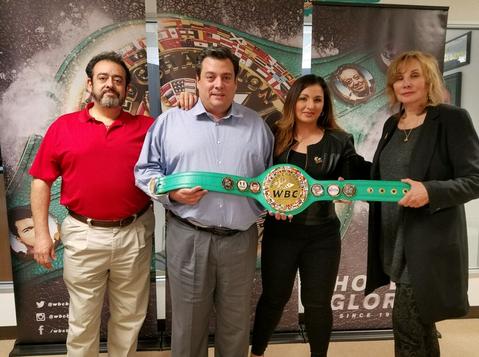 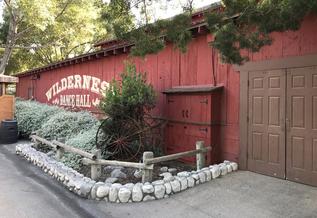 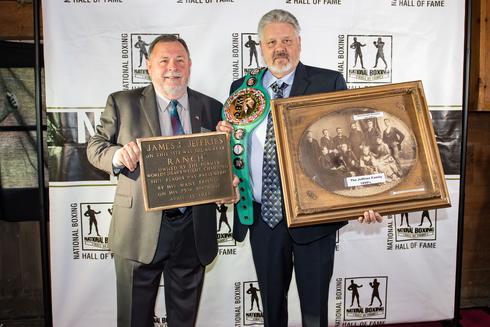 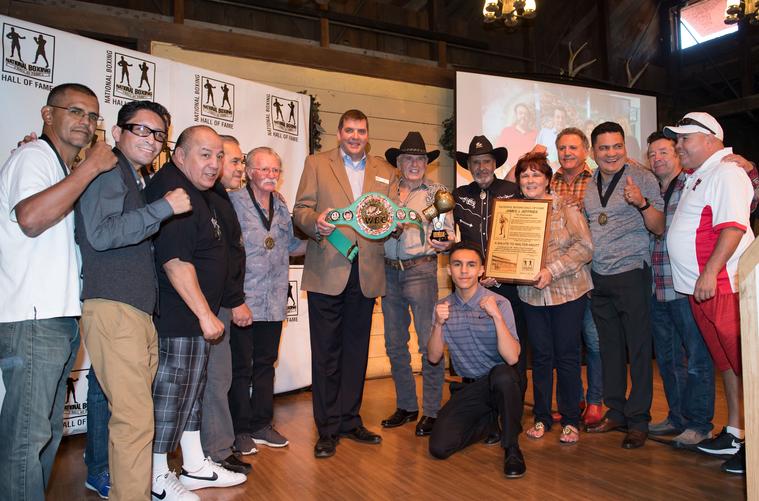 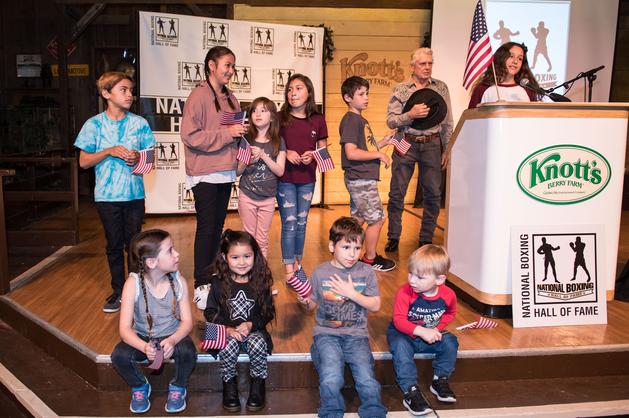 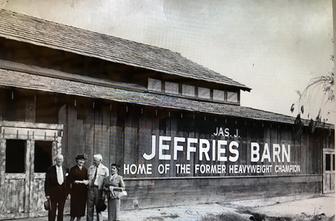 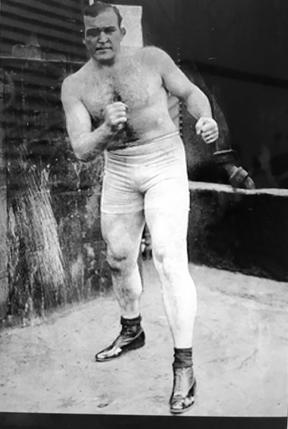 It was a historic day last Saturday at Knott's Berry Farm in Buena Park, Calif. as heavyweight champ James J. Jeffries was posthumously inducted into the National Boxing Hall of Fame (NBHOF).

Here's my recap and photos from the weekend festivities. While it may seem odd at first, boxing and the venue known for their famous boysenberries was a perfect fit! The ceremony took place inside the popular amusement park that houses the original Jeffries Barn (it is now called the Wilderness Dance Hall). The sold-out affair featured an all-you-can-eat buffet of Mrs. Knott's fried chicken and all the trimmings, guest appearances by past and current fighters and special memorabilia (courtesy of the Burbank Historical Society) displayed for the crowd to view.

The NBHOF is helmed by President Bill Young and Vice President Linda Young. They wanted to honor Jeffries and Walter Knott during the February 17 gathering. Jeffries is known as "The Boilermaker" who faced off against Jack Johnson in their legendary Reno match back in 1910. The famed puncher passed away in 1953 in the City of Burbank but his legacy lives on through the historians and fans around the world. Jeffries was celebrated on this illustrious day in sunny Southern California.

The Burbank Historical Society were given a trophy in honor of the Jeffries family and the Walter Knott family also received a trophy from the NBHOF. Boxing official Benjamin Rendon brought a Mexican team of VIPs that were introduced to the crowd, historian Tony Triem shared his knowledge at the mic and Bill Young announced the fighters who were there in person. The luminaries received NBHOF medals as they took their place on stage.

There was a unique World Boxing Council (WBC) belt revealed at the awards show too; the strap included both the NBHOF logo and the Knott's Berry Farm logo. This unique championship belt was presented to Knott's Vice President and General Manager Jon Storbeck. Storbeck and the prizefighters all shined in the spotlight as the flashbulbs went off.

I had a great time catching up with the prizefighters and it was also nice chatting with Baldaseroni and Briggs. Their organization's treasures are showcased at the Gordon R. Howard Museum. Inside the museum stands a statue of Jim Jeffries, his boxing gloves, the Jeffries ranch plaque, vintage posters, framed art, etc. The men brought a trunk load of Jeffries collectibles to the barn at Knott's and handed out magnets with the heavyweight's portrait on them. The boxing fans enjoyed seeing all the souvenirs from a bygone era in the sport.

During the induction rare film clips were shown on the big screen, a flag salute was recited by the young children in attendance, and live music was performed by Matthew Lake from the Young Demspey Band.

And there was a surprise guest who made the scene. This superstar can surely be called the "Undisputed Champion of the World"...the one and only SNOOPY greeted the ticket holders entering the barn! The furry beagle also tried on the green and gold WBC belt as the crowd cheered him on. The SoCal park was a having a Peanuts Celebration that weekend and the star of the celebrated comic strip was one of the fun highlights during the awards luncheon.

After the Jeffries induction, the guests were able to roam the park and check out the Ghost Town, Calico Park, Camp Snoopy, Fiesta Village and all the roller coasters and rides sprinkled throughout the park.

It was a day of "Boxing and Berries" at the National Boxing Hall of Fame event.

Congratulations to all the awardees!

More about the event: www.myboxingfans.com/2018/02/james-j-jeffries-tribute-at-knotts
Photos by Michele Chong